Showing posts from February, 2010
Show all

An evening with Andrew Young 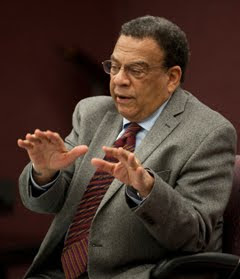 Had the opportunity to attend the talk last night by Civil Rights activist, former Mayor of Atlanta, Ambassador, close associate of Dr. Martin Luther King as well as a former member of Congress. This was part of the ISU Speaker Series, and free to the public. Ambassador Young started as a pastor of a church in Alabama in his early 20’s. That pastoral background was clearly evident throughout the night. He started by warming up to Indiana and some of the folks he has had good experiences with from this state. Good to relate to your audience from the start. He then began his pointed remarks in the terms that we really are in a crisis. He emphasized it we were not in just a political crisis, and an economic crisis, but also a moral crisis. He mentioned in passing that the Deacons of his church reminded him from the beginning, you may have a northern education, but here in the South, we speak from the heart. No notes allowed in the pulpit. He seemed to speak to the crowd witho
Post a Comment
Read more
More posts