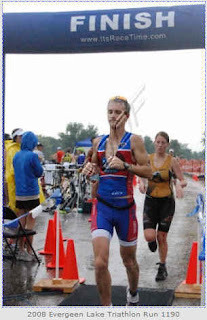 The Evergreen Triathlon (Evergreen Lake) in Bloomington Illinois was this past Saturday (July 19th 2008) and also served as the USA Triathlon Mideast Region Championships. Since I’m about to turn 50 and wanted to try my hand at the USA Triathlon Age Group Nationals this was the race to be at to see how I stack up in the 50 – 54 age group. The course is a true Olympic distance race, so 1.5k (.9 mile) swim, 40k (24.8 mile) bike, and 10k (6.2 mile) run. Not easy by any stretch.

I met the race director Coleen back in February at the race director certification course, and as soon as I arrived on site and started walking toward packet pickup I saw her. She had that look like, “I can’t believe it is raining”, so I just gave her a hug and a thumbs up to not worry about it. Easy for me to say as I walked on and left her to the directing challenge. I heard a volunteer say in the packet pickup tent a storm was supposed to hit about the start time and no refunds. Seems like every major event I’ve done this year has been in the rain.

I racked my bike in the transition area, and heard a USAT official say the water temp was 77.8. Now 78 degrees and less you can wear a wetsuit which makes the swim a lot easier. Of course I checked the website before hand and it said 80 degrees. So with the high temps all week I left mine 100 miles away in Terre Haute. Uh, not good! Not long afterwards I ran into Ryan and Emily from Terre Haute. When I told Ryan the news he told me his wetsuit was back at the hotel, then Emily asked if I wanted to borrow hers. Well that was like manna to a hungry man, and I promptly said yes. Now Emily is pretty small, so this could have been a no go once it arrived, however it was worth a try.

About 20 minutes before the start the light rain became a big downpour. Then I started shivering in the cold with nothing else to wear but my tri suit for the race. With the traffic and the rain as well as a stop for gas, Emily made it back about 5 minutes before the start. Ryan and I were nervous as cats waiting to see if she would make it in time. With wetsuit in hand I quickly put it on, and with some help from an innocent bystander got it zipped up. Yeah, tight, but much better than standing in the cold and I knew it would make the swim much easier.

Standing in my wave start just a minute or two before getting the signal to go I talked with my friend Scott Thomas. I told Scott if Emily would have brought a flaming pink wetsuit I probably still would have wore it. Thankfully it was your basic black unisex model and a nice one at that. Looking out on the grey skies the swim buoys were mighty small and far apart with just 2 buoys per quarter mile. Put your head down in the water and they become much smaller. I started in the middle of the pack and got a decent rhythm going right off. Made the first of 3 turns in a diamond shape course easily enough, and then made the second turn without too much trouble at the half way point. Just after the second turn I could not see any buoys at all. Probably my goggles were fogging up and the rain made it really tough to see anyway. I just followed the closest splash of arms till another buoy appeared. Finally made the 3rd turn and headed to shore. Someone had turned car lights on at the finish which helped, but wasn’t sure at the time that was the actual finish. I made it out in about 32 minutes which was okay considering I had to look really hard to see where I was going.

Made a quick transition to the bike and ran it out to exit to start. Scott was just ahead of me in the swim, but took a bit more time in transition. My fast transition came into play later. The bike had a bit of head wind besides all the rain going out. The first 12.4 miles I had one other person who would pass me, and I passed him back a few times. After the turn around cone he seemed to ride off and I didn’t see him again till the run. The return trip with the tail wind was much faster and I spent some quality time in top gear. It was a great feeling staying in the passing lane and passing as many riders as possible. Made it back to transition in about 1 hour 5 minutes (22.6 MPH), dismounted and ran into T2. Made a good transition to the run, but took the time to put on socks even though they were soaking wet. They were a new pair of coolmax socks and comfy even wet.

The run course was flat, and with the cooler temps and rain, much more comfortable that I was expecting. I did get passed early on by another guy my same age (age was written on the back of everyone’s calf muscle). He made mention of that as he went by, but I wanted to start the run conservative so I just let him go. He stopped at mile 1 water stop so from there we ran together till about mile 3. He (Mitch) stopped again for water and I didn’t see him again until the race was over. The rain really picked up, but I like running in the rain, so no worries. All things considered I should have been running faster, but just didn’t seem to have a lot going and my stomach was feeling quezy for some reason. I made it back to the finish in about 48 minutes (7:45 pace per mile).

When I saw the results posted I ended up 3rd in the 50-54. With the top 5 qualifying for nationals I felt reasonable good about it. Looking over the results if you just counted the actual swim, bike and run times Mitch would have beat me. However, I made up almost 1 minute 30 seconds on him in transition. It really pays off to be quick there and have it planned and practiced. Next up will be Tri Indy on August 17th, then Nationals in Portland Oregon on September 20th.