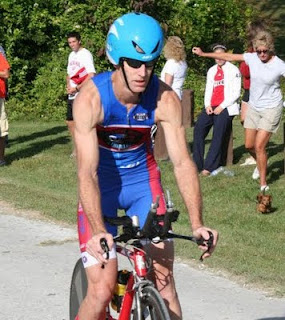 Lake Lemon triathlon was this past Saturday. My good friend Greg Lucas who put on the Terre Haute Triathlon for years had his son Brandon serving as the race director. With that in mind I was the #2 person to sign-up and got to wear that number during the race. Kind of cool, but guess my number next year will be more like #15, but more on that to come.

It started for me on Friday morning when I made the trip over with Greg to help setup the course. I took care of the swim course and helped out with the transition area. Set the swim during the mid day, and used yellow buoys on the turns. A yellow buoy on the last turn worked out to be a bad decision. As the sun came up at the end of the long straight race morning it made seeing a yellow buoy really difficult. Live and learn, won’t do that again. Seemed just fine when I swam the course Friday afternoon …

Race morning I drove over with Mike Calawerts my Spinning class instructor and friend. Greg had a separate bike rack just for us that worked out nice. Even thought I went in the second swim wave, it got started so quick I missed lining up with John Sheldon who I planned to swim with. My swim would have gone a lot better following him than I did on my own. I did okay till about the middle of the course when I got into the back part of the first wave. From there I swam in a tight group too far to the right. Frustrating to swim off course, but I took a hard left and made it around the last buoy and headed back to shore.

The bike started well, but up a nice long hill. I caught an early glimpse of Greg about a minute or so up the road. After the long hill I got some speed up and finally caught him. Gave him a pat on the back as I went buy to spur us both on. We had a bit of tail wind so I wound it up pretty fast on the way out. My first race with the Zipp disc I picked up on eBay last month. At the 8 mile mark we did a quick turn and headed back to transition. The one big hill on the way back went just fine. I keep it in an easy gear and just kept the legs spinning. Saw a group of several riders up the road and got determined to pass them. Took a while but I got all of them I could see by the last downhill. Had a bit of that Lion on the prowl sort of thing going. 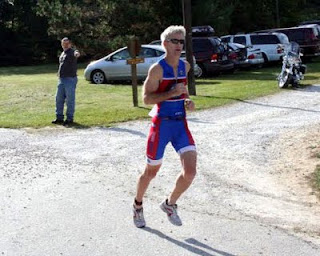 At the transition area I racked the bike and got the running shoes and headed out for the run with one other guy just in front. The big hill loomed large so I took it easy going up. At the top I saw Ryan Shannahan headed back for the finish. He had a big lead on #2 which was no surprise. Ryan can absolutely fly. The sport of triathlon is filled with many first class people like Ryan. From the top of the hill we made the left turn and down a much steeper hill all the way to the half way point. From there it was back up up up. I asked where the escalator was, but received no satisfactory answer. I actually made up some ground on the uphill even thought I was saving some energy. At the top we made the right, down the hill and to the finish. On the final turn I had a competitor pull alongside for the last 1/10 of a mile for a sprint to the finish. I started my sprint and got a bit ahead of him but shut it down not wanting to ruin my legs for Augusta 70.3 next week.

After the results were posted I ended up 15th out of 174 finishers. Good day, lots of fun, and plenty of friends to share the day with. What more can a man ask for. As I’m getting on the upside of 50 I’m really starting to appreciate having days like this. While I need to work more on my run and swim, I’m not sure I could enjoy a day much more even if I did significantly better. God has been good to me beyond any shadow of a doubt. 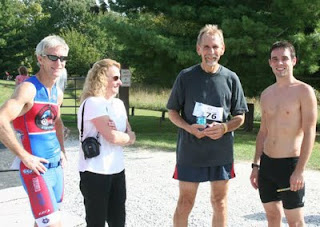 Next week is Ironman 70.3 race in Augusta and my biggest goal of the season. One can only hope it goes as well. Congrats to Brandon and his friends for putting on the event. Best of success to you in the future, I foresee good things ahead.