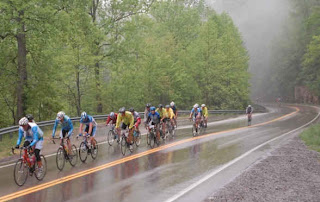 The 3 State 3 Mountain Challenge this year turned out to be a bit more of an adventure than planned. Well, may be a lot more adventure than planned. It reminds me of the famous quote from Theodore Roosevelt, “The credit belongs to the man who is actually in the arena, whose face is marred by dust and sweat and blood, who strives valiantly, who errs and comes up short again and again because there is no effort without error and short-comings, who knows the great devotion, who spends himself in a worthy cause, who at the best knows in the end the high achievement of triumph and who at worst, if he fails while daring greatly, knows his place shall never be with those timid and cold souls who know neither victory nor defeat.” When the rain was pouring, temperature falling, and the crowd at the start was much thinner than expected, it would only be a day for those willing to steel themselves for what lay ahead.

After waiting an extra 40 minutes for the initial thunderstorm to clear the ride began with a mass start outside Findley Stadium. I was shivering from the cold so I took the pace out fairly hard, with my friend Tom tucked in behind. The first 11 miles are relatively flat, but after just a few minutes we encountered the rain storm in full force. Making it to the base of the first climb, Suck Creek Mountain, Tom took over tempo for the first few miles of the climb. It is a steady grade, 5 plus miles to the top. We stayed with decent size group for just about all the climb. At the top we knew we were in for a dicey descent 5 miles back down featuring 40 mph speeds, big curves and rain. A combination where cold dead souls need not apply. Didn’t slow much as I tend to like descending, but Tom being a bit wiser took it easy. We ended up separated by a good distance at the bottom, but I didn’t realize how much. Slowing down I let a couple of groups go by thinking Tom would catch back on, but that didn’t happen. Trying to decide what to do, I ended up tagging along with two other riders who I stayed with for the new 25 miles or so.

Starting the second climb I knew they were a bit faster climbers than me, so I watched them ride away as I managed a reasonable pace up Sand Mountain. Last year here I felt really good, but not so much this day. Hardly any riders in front of me or behind, so I rode it completely on my own. After the top we have a nice long highway section before the rest stop at mile 60 something. Had a group of 14 or so pass me that I hooked on to and stayed till the rest stop. Took a short bathroom break and waited a few more minutes till a group of 5 were ready to leave. Interesting how bonds form with a few riders who have likely never met, yet become depending on one another quickly in such rides. 3 of us in that group stayed together for the next 20 miles till we reached the rest stop just before Burkhalter Gap. Burkhalter is the back side up Lookout Mountain, and certainly the most feared section of the route.

After a short break to give my legs a breather, I emptied my water bottles, took off the arm warmers and cycling cap to make myself as light and cool as possible for the impending ascent. As soon as you make a left you start the 2.4 miles up. Here we had a tail wind that gave my confidence a boost. I probably pasted 10 riders or more going up, and even though I suffered some near the top, it wasn’t as bad as the previous year. I stopped at the top to refill one water bottle for the remaining 15 miles. A female team (Peachtree Bicycles) was just getting ready to head out for the last section of rollers so I slipped in to the group along with maybe 7 or 8 other guys. Content to stay with them since they were clicking off a decent tempo, I rode with them across the big rollers remaining. Several dropped off, but two of the girls were still setting tempo so I just stayed with them all the way down Lookout Mountain to the base of Chattanooga. There they pulled off to wait for the rest, and I rode in with another guy from Minnesota. We finished in 6 hours 15 minutes. About 10 minutes faster than last year, but I stopped more then, so ride time was probably about the same.

Waiting near the finish for Tom to come in, I guessed he would be in within 30 minutes. After that time had come and gone, I waited till his finish time a year ago, and still no Tom. I asked around any official looking group to see if they knew of any riders who dropped, but no one knew anything. Finally at the 8 hour mark I started getting a really sick feeling something was wrong. I booked it to the hotel to see if maybe he had cut the ride and was there, but not there either. Picking up my cell phone I saw that I had 8 missed calls. A bad sign if ever there was one. Bad turned to worse and I called home to find out Tom had crashed heavily and was taken by ambulance to Erlinger Hospital.

Arriving at the Emergency Room, I found Tom with a large laceration on the head that required12 or so stitches to close. He had two broken ribs, a large swelling over his left eye and skin abrasions on large sections of his left side. He had no memory of what happened; only that he was around mile 41 near Nickajack lake. Fortunately nothing that would not heal given 6 weeks or so. Still I felt awful about the whole situation.

Back to my quote from Mr. Roosevelt, Tom may have taken a hit at that particular moment, but he was certainly no cold soul knowing neither victory nor defeat. Why we show up at the starting line of such events in such conditions is because we were willing to embrace the life before us. I’m not advocating undue risks, but I am advocating a certain kind of courage to make life the adventure that it can be.