June 17, 2009
Saturday June 6th was the first Hoosierman Triathlon, in Bloomington and my first tri of the year. Had some friends racing as well so it was good to have the company. I met John Sheldon as I walked my bike into the transition area and parked next to him near the swim exit. We were both in the last wave to start so I told John to swim straight so I could draft in behind him. I was sort of kidding at the time, but sure enough I ended up on his heals during most of the swim and let him guide the way. The swim was around 500 meters in Lake Monroe and very comfortable in a wetsuit (69 degrees). At the swim exit I even had to ask John to help with the wetsuit zipper. Maybe I should have tipped him as my person assistant :-)

The first transition went really smooth and I was out on the bike and up the first major climb of the day pretty quick. It was a tough, but expected considering this is Bloomington. Most of the bike ride I felt really good and had the hammer down all the way. Only incident was a girl I was closing on quickly hit her brakes hard right in front of me as she was going through a busy intersection. I thought I was going to slide into her, but managed to skid to her right, and just missed going off in the grass. Almost came to a complete stop before I got it going again. I think I had the 12th fastest bike split, but would have been top 10 except for the incident. No harm really, just got my heart rate maxed out for a minute.

After transition 2 the run started back up the hill and then a surprise first mile of steep single track trail. Just like you would see at an Xterra event. Had to admit that I kind of liked it, but it was really a challenge I wasn't expecting. I saw Emily Oiler in the familiar Forward Motion team apparel on the trail. Took me a long time to make the catch, with her a lot better swimmer than I am. The last two miles are rather flat, and all in all a decent run. 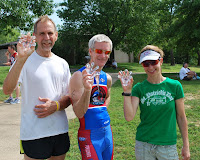 I ended up 15th overall out of 187 and second in the 50-54 age group. Don't like getting beat by other 50 year olds, but if I could just swim faster. After the finish I was talking to the race official and friend Attila and John came over to announce to him he saw Satan on the first big hill of the bike course. Okay it was hard, but not that hard :-)

Thanks to Ryan Oiler for the pictures and the encouragement on the day. If Ryan would have raced I would have been 16th instead of 15th.

Another great race for you! I recovered my Gmail password, so instead of lurking I can actually post!

Way to go and it looks like I will be doing Augusta with you.