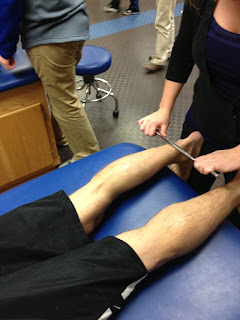 This year the Forward Motion Athletics triathlon team is being sponsored by the Indiana State University Physical Therapy & Sports Rehabilitation Clinic.  We have had the pleasure of visiting a couple of times already this year.  The first visit to the clinic was focused on using foam rollers and specific exercises to reduce and repair overuse injuries.   Very worthwhile visit and they also spent some time with each of us in testing for strengths and weaknesses.  Needless to say I have a few weaknesses they gave me some tips on improving.

The second visit was a bit more interesting, especially for me.  The first part was to introduce resistance band exercises and show us how to use them.  We also did some knee and back strengthening work.  Now the fun part began.  After the clinic they asked if anyone needed some specific work, and they were offering to do some Graston Technique on us if we wanted to.  I’ve read and heard a fair amount about Graston, but have never had it done.  A picture is worth a thousand words in describing it so hopefully you will get the idea real quick just by viewing it.   Basically the purpose is to breakdown scar tissue and fascial restrictions using a metal bar to work them out.  I have a history of calf muscle injuries so I was an early volunteer.  Much like what I’ve read, it is very effective in removing scar tissue in short order, but not necessarily in an easy fashion.  I can say a definite “Yes” to the fact that it hurts, but I can also say it did the trick.

Like Nicole told me, I would be bruised up and sore for a couple of days, and it happened just like that.  The bruising did go away fairly quickly and I was able to do a long run a 3 days later without any real issue.  What the effect is over the long term I can’t say yet, but I can tell that the really tight spots they worked on feels much improved.  Nicole also explained what really causes the calf issues are not running with my feet tracking straight.  Depending on how you run it can affect either the inside or the outside of the calf muscles.  Had no idea about that before despite being a runner for 30 years.  Just shows how effective a short visit to a physical therapist is. 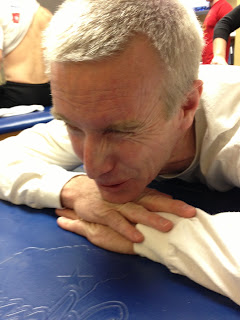 Later this year the clinic will be offering the use of Dartfish running gait analysis.  Dartfish incorporates a combination of video and software to help prevent injuries and improve performance.  Just another reason I’m really becoming a fun of the clinic.  The only thing they don’t offer was a bullet to bite on for Graston.  Oh well, I’m tough, well sort ah …

Unknown said…
I have heard of the Graston Technique, but I didn't quite comprehend what it does or how it's done, so I'm glad I came across this post. It does look and sound like it hurts. But from your experience, it also seems to be effective. I need to ask my physical therapist about this. Thanks for sharing, Paul!

Unknown said…
I went to another PT place for second review and did PT for another 3 months to completely recover and get back to sports. massage Mooloolaba

Unknown said…
Thanks for sharing this. I never have heard about the Graston technique. And it seems effective though it is a bit painful. All that I have heard about is the Physiotherapy.
January 21, 2014 at 12:41 AM

March 29, 2013
Talked to a friend doing her first triathlon and what few tips I could offer in a few minutes at the side of the pool yesterday.  Thinking about it a bit more here is my top 10 tips for a sprint triathlon: 1       Relax in the swim and just enjoy it.  If it’s a pool swim or a wetsuit swim you have nothing to worry about.  In a pool if you get tight just stop for a second, stand up or grab the lane line.  In an open water swim with a wetsuit just stop and let the suit hold you up and float.  Biggest problem with the swim is just getting overly worked up about it.  By the way, get a wetsuit made specifically for triathlon that fits you.  Worth their weight in gold they are. 2       Practice transitions several times before the race.  The key to good transition from swim to bike and bike to run is simplicity.  Do as little as possible with an absolute minimum of equipment.  Run from the swim to the bike don’t just jog.  Have your helmet and sunglasses on top of the handlebars an
Read more

November 04, 2019
This team stand here today among friends We may have been born in different countries, but we are the same Today we are going to talk a little bit about Jesus defining sermon It’s found in Matthew chapters 5, 6 and 7 It explains how a Christian should conduct themselves It sets a very high standard for all of us to follow This conduct is for every man, woman and child that professes to be a Christian No more important words have ever been spoken on earth before an audience At the start of this sermon Jesus mentions 9 specific Beatitudes A beatitude is a way to be blessed by God Do you want to be blessed by God, I do These blessing may not happen on this earth, but they will happen in heaven The sermon begins by Jesus sitting on a quiet mountain side with just his disciples So lets read the story: Read Matthew 5 1-12 Verse 3: blessed are the Poor in Spirit for theirs is the kingdom of heaven: which means you feel broken and can go no further Verse 4: blesse
Read more 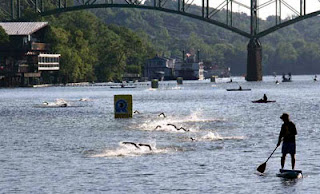 Rev3 put on a good show at Knoxville Olympic Distance Triathlon May 9th (.9 mile swim, 25.8 mile ride, 6.2 mile run). I drove down Saturday and got there just before packet pickup and the transition area closed. Having visited the Worlds Fair way back when I immediately recognized the park downtown, very nice place. Liked having all the personalization like your name on your race number and your transition spot. Race morning I stayed in the room till the last minute so as to not be cold hanging around for the start. Got my stuff set, put on the wetsuit and still had to wait a long time for the last wave to go. The swim was 400 meters or so back into the current in the Tennessee River, take a right turn around a large buoy then a straight shot to the dock at the end. All went smooth till the end where I tried to pull myself out of the water without any steps. A volunteer grabbed my arm and pulled me straight up onto the dock. It was like the hand of God reaching down. Needl
Read more