December 01, 2015
You're 75, had 2 bouts with cancer, been through an aortic arch aneurysm and dealing with some arthritis.  What kind of goal do you set for yourself?  If you’re Al Lucas you sign up for an Ironman, and not just any will do. You sign up for the Ironman World Championships in Kona Hawaii.  A legend even among hardened triathletes.  The distance: 2.4 mile ocean swim, 112 mile bike ride through the lava fields, and 26.2 mile run finishing back at the beach where it all began.

As with any great story this one begins long ago, and with a family that is deeply involved.  Al’s son Greg started this with the first entry into Ironman Hawaii in 1986.  Not long after, in 1988 Al’s daughter Julie also entered the race.  Al began racing triathlons himself at age 43 with more of a background in traditional Indiana sports like basketball and baseball.

With the Hawaii Ironman embedded in family lore, Al made his initial attempt at the race in 1990.  Making it through the swim and bike he suffered a fate somewhat unique to Ironman competitions in a hot climate- Hyponatremia.  Basically the body loses too much sodium in the blood and can no longer move water across permeable membranes.  Thus leaving you dehydrated even when you continue to drink.  The result was passing out at mile 10 of the marathon and an emergency ride to the hospital.

To say he was extremely disappointed at not finishing the triathlon would be an understatement.  So much so that Al set up his own “Ironman” course from his house in 1992.  With a lap pool in his back yard for the 2.4 mile swim, he then plotted out a 112 mile bike course from Terre Haute to Paris, Illinois and surrounding area, then a 26.2 mile marathon course. There were no crowds, no aid stations…..only his family at various points along his course. At around 11:30 that night Al completed the entire triathlon course complete with a finish line, lights and banner.  Al’s perseverance and determination had temporarily replaced the disappointment of his 1990 Ironman problems in Hawaii.

Al continued to participate in triathlons, but the idea of giving Ironman Hawaii another go was never too far away.  The challenge being to race in a World Championship event.  Qualifying with very limited spots against the best athletes from all over the world is a daunting affair.  There were, however, a few roadblocks in his quest between 1990 and 2015. In 2005 Al was diagnosed with prostate cancer which required surgery. All was well until 2008 when he was diagnosed with an aortic arch aneurysm that required immediate open heart surgery to repair- his aortic valve was also replaced.  Again all was going well with his health until March 2014 when it was discovered that the cancer had come back. This time he would have to undergo 38 radiation treatments.  This occurred in the midst of training for a race in Boulder Colorado.  Ten days after completing these treatments he completed the Boulder 70.3 Ironman.

Then in March 2015, Al received a coveted Ironman lottery entry and began preparing for his journey back to Kona. His son Greg had done this Ironman race twice [1986 and 1992], so his encouragement and experience with Al’s training and nutritional programs was very helpful. In July Al did the Muncie 70.3 Ironman and actually qualified for the 70.3 World Championships-held in Austria- but passed to continue his preparation for Hawaii. In October Al, his wife Judy and just about everyone else in the family-including grandchildren -made the trip to Kailua-Kona Hawaii.

Race morning October 10, 2015 – almost 25 years to the day since his first attempt –he was standing on the beach at the break of dawn staring down a 2.4 mile swim course in the open ocean.  Emotions for everyone are fully charged.

The Pro men are sent off with a cannon shot, then the Pro women, next all the amateur men [Al included] and finally the amateur women starting just behind.  Swimming with 2,300 triathletes with one goal in mind, 1.2 miles straight out into the ocean, make the turnaround at the big sailboat, and head back for the beach.  Al makes it out around the sailboat in good spirits.  Now with each stroke being closer to shore his confidence was strong.  One trick, he had to keep his eyes closed every time he looked down to avoid sea sickness from the waves and currents.  The time cutoff for the swim: 2 hours 20 minutes.  Al makes it back to Kailua Pier swim finish in 1 hour 55 minutes with plenty of time to spare.  The first out of the water this day was German Pro Jan Frodeno, Olympic gold medalist who would go on to win the race, and become the Ironman World Champion.

Al makes the run down the pier, grabs his bike and starts the 112 mile ride. The time cutoff for the bike is 10 hours and 30 minutes [including the swim]. The first 56 miles up Queen Ka’ahumanu Highway goes really well, averaging 19 miles per hour.  However the 18 mile climb and brutal trade winds around Hawi combined with the radiant heat of 130 degrees coming off the asphalt roads really started to take its toll.  Struggling with the heat, climbs and head winds through endless lava fields, the ride back was an intense effort.  Dropping out is not an option.  Al makes it back to the pier in 8 hours 2 minutes. His total time is 10 hours 5 minutes. Hopping off the bike and making his way through transition the legs feeling mostly like rubber. 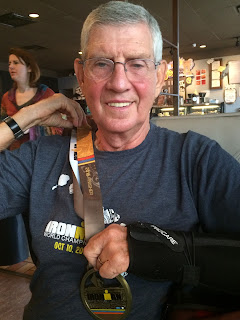 Last order of events, is the 26.2 mile marathon run.  At midnight the clock will strike and the race will officially end. Greeted by the heat and humidity he makes his way up Palani Hill and back out the Queen K highway undeterred. Here the push toward the finish line takes its full measure.  Beginning with a walk- jogging where he can- he averages 16 minute miles.  Darkness comes, the clock continues.  Al spends some miles with fellow triathlete Lew Hollander who is 85 and looking for his 24th Kona finish.  Lew would eventually drop out, Al kept going.  The toughest point of this race is around mile 16, the Energy Lab: dark, hot and unforgiving. Coming out of the Energy Lab 6.2 miles remain and the glow of the finish line can be seen in the distance.

At mile 24 Al is greeted by the first Kona street lights breaking the darkness.  A highlight here was the respectful fans. Inspired by watching a 75 year old complete what would seem to be an impossible task, these fans would stop and cheer him to the finish line.   At this point on the outskirts of Kona midnight struck.  While the race may have it’s time cutoff, Al was determined to make it all the way to the finish.  And finish he did.  He was greeted by the CEO of the Ironman Andrew Messick and COO of the Ironman Shane Facteau who personally handed Al his finisher shirt and medal.  No giving up, no emergency trip to the hospital. Al, surrounded by family, completed a journey he began 25 years ago.  Perseverance and determination had indeed paid off!

March 29, 2013
Talked to a friend doing her first triathlon and what few tips I could offer in a few minutes at the side of the pool yesterday.  Thinking about it a bit more here is my top 10 tips for a sprint triathlon: 1       Relax in the swim and just enjoy it.  If it’s a pool swim or a wetsuit swim you have nothing to worry about.  In a pool if you get tight just stop for a second, stand up or grab the lane line.  In an open water swim with a wetsuit just stop and let the suit hold you up and float.  Biggest problem with the swim is just getting overly worked up about it.  By the way, get a wetsuit made specifically for triathlon that fits you.  Worth their weight in gold they are. 2       Practice transitions several times before the race.  The key to good transition from swim to bike and bike to run is simplicity.  Do as little as possible with an absolute minimum of equipment.  Run from the swim to the bike don’t just jog.  Have your helmet and sunglasses on top of the handlebars an
Read more

November 04, 2019
This team stand here today among friends We may have been born in different countries, but we are the same Today we are going to talk a little bit about Jesus defining sermon It’s found in Matthew chapters 5, 6 and 7 It explains how a Christian should conduct themselves It sets a very high standard for all of us to follow This conduct is for every man, woman and child that professes to be a Christian No more important words have ever been spoken on earth before an audience At the start of this sermon Jesus mentions 9 specific Beatitudes A beatitude is a way to be blessed by God Do you want to be blessed by God, I do These blessing may not happen on this earth, but they will happen in heaven The sermon begins by Jesus sitting on a quiet mountain side with just his disciples So lets read the story: Read Matthew 5 1-12 Verse 3: blessed are the Poor in Spirit for theirs is the kingdom of heaven: which means you feel broken and can go no further Verse 4: blesse
Read more 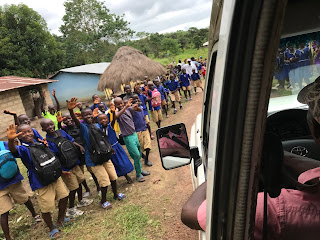 October 22, 2019 Pele Wala Village Sierra Leone Took the long way into the village and passed where we turned in before. Road we took last year was impassable. The greeting we received was just like last year, but even bigger. This time they did a native dance and drums. Overwhelming for sure. I quickly saw Fatmala that is sponsored by Ken Baker. So glad to see a friendly face among a few I knew. The local construction crew had the church walls up, and were working on the school as well which is right next door. Both just passed the well that was put in last year. We had introductions again under the big tree, couple of speech’s then walked down to where the school was under construction. Santos is the foreman leading the construction and the walls for the school was about half done. After that they had lunch for us and played with the kids. Watching the kids eat lunch was crazy. They went for the food like they haven’t eaten in a week. No knives, forks or spoons, they eat wi
Read more